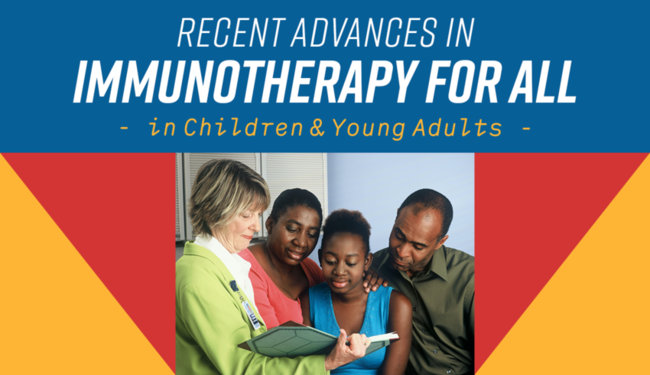 Acute lymphoblastic leukemia (ALL) is the most common type of childhood cancer, with about 3,000 Americans under the age of 20 diagnosed with ALL per year.1 Fortunately, childhood ALL is often successfully treated with chemotherapy. Around 90 percent of children with ALL will eventually be cured. Children with ALL are considered cured after 10 years in remission.1

Even when refractory ALL is cured, the treatment can be grueling, and the extra rounds of chemotherapy can increase the risk of long-term physical and mental effects.3 Extra chemotherapy can be especially hard on those who relapse in their teens or in young adulthood, as they can be less able to tolerate high doses of chemotherapy.4

Childhood ALL research is focused on helping more children and young adults with refractory, or difficult to treat, ALL survive and flourish. One very promising area of study is the use of immunotherapy. Immunotherapy can help children and young adults with these forms of ALL to achieve remission and to better handle other forms of curative treatment, such as stem cell therapy.

Immunotherapy for Childhood ALL

Currently, immunotherapy is used to treat B-cell ALL. The most common type of childhood ALL by far, B-cell ALL affects 88 percent of children with ALL. B-cell ALL occurs when stem cells that would normally become B cells — white blood cells that help with immune response — become malignant.

Blincyto (blinatumomab) is currently the only monoclonal antibody treatment the U.S. Food and Drug Administration (FDA) has approved for use in children whose ALL has relapsed or is not responding to chemotherapy. Blincyto is a bispecific T-cell engager (BiTE).7 A BiTE attaches to two different proteins — one on a tumor cell and one on an immune cell, leading the immune cell to attack the cancer cell.5

Blincyto has shown promising responses in treating children and young adults with relapsed ALL. In a December 2019 study of children and young adults (up to age 30) with relapsed ALL, those who received Blincyto had a 79 percent overall survival rate compared with a 59 percent overall survival rate for those who received a standard chemotherapy regimen. They were also more likely to be able to receive a stem cell transplant. In addition, participants who received Blincyto experienced fewer side effects; such as fever, infection, and sepsis; than children who received chemotherapy.8 This was especially important for young adults, who are more likely to respond poorly to high doses of chemotherapy. They were better able to undergo treatment without risking life-threatening infection.4

Blincyto is administered through an IV. Treatment begins in the hospital, where a child or young adult with ALL is monitored for any reactions to the Blincyto infusion. After three days, treatment may continue at home with a portable IV pump. A dose of Blincyto can last 24 hours, 48 hours, or one week — although the weekly dose is only available for those weighing over 50 pounds. The IV bag can be changed at home or at an outpatient clinic. Treatment generally lasts for four weeks. If a second cycle of Blincyto is needed, a child or young adult will pause between treatments for two weeks, then begin treatment again. (Hospital monitoring will be needed for two days.)9

Common side effects of Blincyto include fever, headache, and infection. Neurologic complications are also common. These complications include seizures, confusion, disorientation, difficulty speaking or slurred speech, loss of balance, and loss of consciousness. Less common side effects of Blincyto include gastrointestinal symptoms, anemia, low blood pressure, and low appetite. A rare but dangerous side effect of Blincyto treatment is a reaction called cytokine release syndrome. This syndrome occurs when immune cells release too many cytokines (proteins that direct immune response). Symptoms of cytokine release syndrome include high fever, chills, nausea, vomiting, diarrhea, muscle and joint pain, and dizziness.10

Research on Besponsa for treatment of childhood ALL is less developed than research on Blincyto, but the research does suggest that, like Blincyto, Besponsa is better tolerated than standard chemotherapy. A 2018 study found that Besponsa induced complete remission in 67 percent of participants.12

Unlike monoclonal antibodies, CAR-T cell therapy works against ALL by altering the body’s own immune cells and reintroducing them into the body.5 Kymriah (tisagenlecleucel) is a CAR-T cell treatment that targets a specific protein on B cells. Kymriah is only FDA-approved for children and young adults through age 25 who have B-cell ALL that has recurred after treatment or is not responding to treatment.13

Kymriah is created through a process called leukapheresis. Blood is drawn through an IV, and immune cells are filtered out, which usually takes a few hours. The immune cells are taken to a lab, where they are genetically modified to contain chimeric antigen receptors (CARs) that attack cancer cells.14 This modification can take up to a month. Before receiving the CAR-T cell therapy, a child or young adult with ALL undergoes a few days of conditioning chemotherapy, which improves the body’s receptivity to CAR-T cell therapy. After this chemotherapy is done, the child or young adult will receive the CAR-T infusion, which generally only takes half an hour.14

Kymriah has shown good effects in treating refractory childhood ALL. A 2018 study of children and young adults with refractory ALL found that, of the 75 participants treated with Kymriah, 81 percent experienced remission within three months. After a year, the overall survival rate was 76 percent.15

Side effects of Kymriah are similar to those of Blincyto, including neurological effects, such as effects on speech and seizures. Kymriah also raises the risk of cytokine release syndrome.16 It is common for children who receive this treatment to need monitoring and support in an intensive care unit to manage these complications.

What’s Next for Immunotherapy for Childhood ALL

In the future, immunotherapy could become a first-line treatment for childhood ALL. Right now, immunotherapy is showing remarkable results for children who are experiencing refractory ALL. It could be used to help children and young adults successfully complete other therapies, such as stem cell transplants — or avoid having to undergo such invasive treatments.17 In addition, scientists are working on modifying CAR-T cell therapy so an “off-the-shelf” version is available, eliminating the need to harvest immune cells from each individual. This would make the treatment quicker and cheaper.18