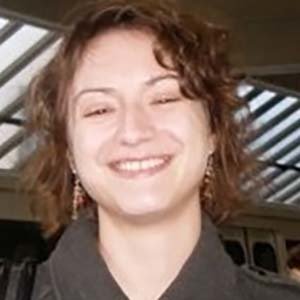 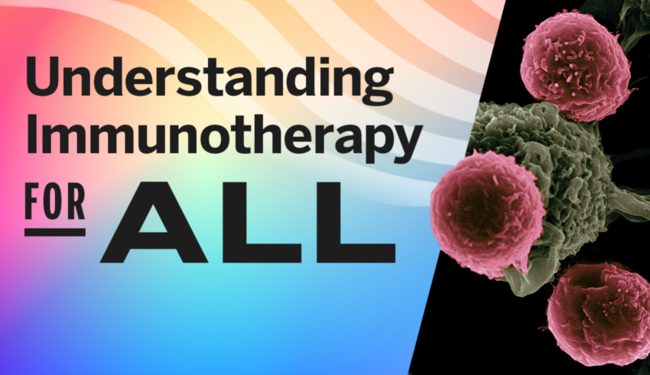 Acute lymphoblastic leukemia (ALL), also known as acute lymphocytic leukemia, is a cancer of the blood and bone marrow. ALL begins in the bone marrow, where the body produces the stem cells that eventually become blood cells — red cells, white cells, and platelets.1 In ALL, the stem cells that are meant to become white blood cells develop genetic mutations that result in cancer. Unlike chronic forms of leukemia, which grow slowly over a period of years, ALL progresses quickly and can be fatal within a few months without treatment.2

ALL is the most common type of childhood cancer.3 While ALL is less common in adults, 4 out of 5 deaths from ALL occur in adults.4

Because of the prevalence of ALL in children and its danger to adults, new treatment options for ALL are an important focus of research. One of the newest and most prominent fields of treatment for blood cancer is immunotherapy. While immunotherapy is still an emerging field, it is becoming increasingly important in ALL treatment.

Immunotherapy for ALL boosts your own immune system’s ability to identify and destroy malignant cells. Several different aspects of the immune system are harnessed in immunotherapy. B cells produce proteins called antibodies to fight infections. Antibodies work by targeting harmful proteins called antigens for destruction. When an antibody comes into contact with an antigen, it attaches to the antigen and alerts the rest of the immune system to kill the harmful cells. T cells work by targeting abnormal cells and destroying them directly or causing them to self-destruct.5

What Types of ALL Can Immunotherapy Treat?

Immunotherapy is especially exciting as a treatment for adults and children with relapsed ALL or in cases where ALL does not respond adequately to treatment — known as refractory ALL. ALL is more likely to be fatal in adults than in children, possibly because of the mechanisms of the disease, or because children are better able to tolerate aggressive cancer treatments such as chemotherapy.4

Currently, immunotherapy is used to treat B-cell ALL. B-cell ALL is the most common type of ALL, occurring in 88 percent of children with ALL and 75 percent of adults with ALL.9 B-cell ALL occurs when stem cells that would normally become B cells—a type of white blood cell that helps with immune response—become malignant. Immunotherapy for ALL targets proteins that are commonly found on these malignant B cells. 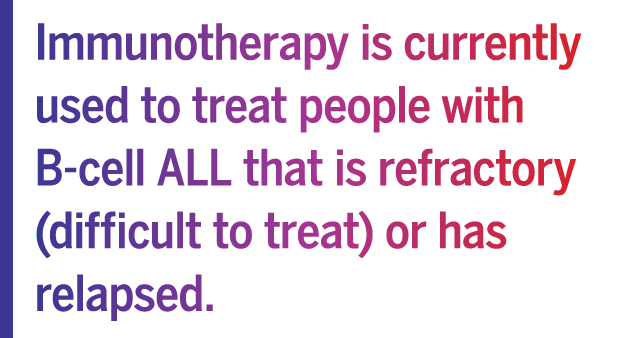 Three types of immunotherapy treatments are approved by the U.S. Food and Drug Administration (FDA) as a second-line treatment for B-cell ALL. Second-line treatments are approved for use after other treatments, such as chemotherapy, have failed to eliminate the tumor cells or after the tumor cells have returned. However, as the field of immunotherapy expands, clinical trials are sometimes available for other types of experimental immunology to treat other types of ALL.

Types of Immunotherapy for ALL

The monoclonal antibody treatment Blincyto (Blinatumomab) is a bispecific T-cell engager, or BITE.12 A BITE attaches to two different proteins — one on a B cell and one on a T cell.5 CD19 is an antigen found on the surface of B cells. Another protein called CD3 is found on T cells. By attaching to both CD19 and CD3, Blincyto connects the B cell and the T cell, leading the T cell to attack the cancerous cell.13 Blincyto is approved to treat B-cell precursor ALL in people who still have detectable ALL after chemotherapy.12

Unlike monoclonal antibodies, CAR-T cell therapy works against cancer by altering the body’s own immune cells and reintroducing them into the body. During CAR-T cell therapy, blood is drawn in a process called leukapheresis.5 T cells are filtered from the rest of the blood. The remaining portion of the blood is replaced into the body, a process that generally takes a few hours. The T cells are taken to a lab, where they are genetically modified to contain chimeric antigen receptors (CARs) that attack cancer cells.14 After the T cells are altered, they are reintroduced into the body for treatment.

Kymriah (Tisagenlecleucel) is a CAR-T cell treatment that targets the CD19 protein on B cells. Kymriah is used in children and young adults through age 25 who have B-cell ALL that has recurred after treatment or is not responding to treatment.5

Side Effects of Immunotherapy

Common side effects of immunotherapy for ALL include gastrointestinal distress, headache, and fever. Monoclonal antibodies can also cause low white blood cell counts, which can increase the risk of infection.5

In rare cases, each type of immunotherapy may cause more severe side effects. Blincyto can affect the nervous system, causing seizures, difficulty speaking, confusion, and dizziness. Some people can also experience reactions during drug infusion, such as headache, dizziness, fever, chills, nausea, and shortness of breath.5

In rare cases, CAR-T cell therapy can cause a dangerous reaction called cytokine release syndrome (CRS). CRS occurs when T cells release too many cytokines.5 The mass release of cytokines (chemicals that direct immune response) shows that the treatment is working, but the cytokines can also cause inflammation and affect blood pressure.14 Symptoms of CRS include high fever, chills, nausea, vomiting, diarrhea, muscle and joint pain, and dizziness. CRS can even occur days or weeks after treatment. The risk of CRS means that CAR-T cell therapy can currently only be administered at approved medical treatment centers. Supportive therapies, such as steroids or the anti-inflammatory drug Actemra (Tocilzumab), can help control CRS.15

The Future of ALL Treatment

Immunotherapy shows promising results in treating adults and children whose ALL does not respond to standard, first-line chemotherapy treatment. Scientists are working on modifying CAR-T cell therapy so an “off-the-shelf” version is available, eliminating the need to harvest T cells from each individual. This would make CAR-T cell therapy cheaper, quicker, and more easily available. While it’s too early to say whether immunotherapy could become a first-line treatment for some types of ALL, research is ongoing, and major advances are expected.16

Sounds like you still need a transplant & surviving the chemo is a problem.

During the COVID-19 pandemic, MyLeukemiaTeam will provide summaries and links to articles of...

During the COVID-19 pandemic, MyLeukemiaTeam will provide summaries and links to articles of...
read article >

Article written by Alison Channon The 2020 fall and winter holiday season will be different than...

Article written by Alison Channon The 2020 fall and winter holiday season will be different than...
read article >

Article written by Lisa WuHaving any type of cancer can be tough, but working through those...

Article written by Lisa WuHaving any type of cancer can be tough, but working through those...
read article >

Article written by Nyaka MwanzaHairy cell leukemia is a rare type of chronic leukemia that...

Article written by Nyaka Mwanza Acute promyelocytic leukemia (APL) is one of several subtypes of...

Two Ways to Get Started with MyLeukemiaTeam

Connect with others who are living with leukemia. Get members only access to emotional support, advice, treatment insights, and more.

Get the latest articles about leukemia sent to your inbox.